GA is one step closer to the lead-free future

admin September 1, 2022 Light Airport Comments Off on GA is one step closer to the lead-free future 5 Views

flynas announces the launch of direct flights to Mumbai from

The FAA’s approval of the use of G100UL fuel in all piston aircraft fulfills a long-standing goal of finding a solution that can be used for the entire GA piston fleet.

“I am proud of GAMI, the industry team and the FAA for persevering over the long haul and achieving a fuel that the FAA has recognized as a viable low-lead alternative,” said the AOPA President, Mark Baker. “It is vital that we find solutions to what has plagued general aviation since the seventies. This is definitely the biggest problem I faced during my time at AOPA.

In 2021, the FAA approved STCs for GAMI covering a smaller number of Cessna 172 engines and airframes, then expanded the Approved Model Lists (AMLs) to include essentially all low-compression engine and airframe combinations. Although this was seen as an encouraging step forward on the path to supplying the piston aircraft fleet with unleaded aviation fuel, the STCs did not include aircraft requiring the fuel with an unleaded rating. higher octane which accounts for 60-70% of av gas consumption. This latest announcement from the FAA addresses the needs of these higher compression engines.

GAMI co-founder George Braly said: “This is a great day for the industry. This means that for many of our general aviation communities, and particularly for much of the West Coast, the next generation is on the way. And that means our industry will be able to move forward and thrive, and provide the essential infrastructure for this country for everything from Angel flights to the critical training of our future airline pilots.

Braly thanked AOPA and the GA community for their support throughout this long process. “Without it, we couldn’t have done this,” he said.

Braly said Avfuel, a fuel supplier based in Ann Arbor, Michigan, was ready to handle the logistics and distribution of G100UL, and said it was open to partnerships. “Our understanding is that any qualified refiner or blender of existing aviation fuels will be eligible to produce and sell it subject to FAA-approved quality assurance requirements,” he said.

When will the G100UL reach airports and aircraft fuel tanks?

When the G100UL will reach airports is still uncertain. “It’s going to take some time to manage the infrastructure,” including manufacturing and distribution, Braly said. The supply chain “is still very damaged infrastructure and that’s not going to make the process any easier, but we know how to do this, and with the support of the major players, I think we can do it. It’s going to be limited at first, but it can be accelerated quickly,” he said.

Baker said it was important that all fuels be approved for use in the California market as soon as possible, in light of the fact that some municipalities have prematurely banned the sale of leaded avgas and threatened a safe and smart transition. to unleaded fuel. “It’s a politically charged issue there, and it will help keep our airports open with fuel that works with all planes.”

AOPA will also purchase a quantity of unleaded fuels for use in its fleet of piston aircraft used for GA travel and flight training, showing members that it has full confidence in the ways and processes of FAA approval.

How much will the G100UL cost?

While the fuel cost has not been determined, Braly said the small-batch production process that will initially affect the G100UL’s arrival at airports means the fuel will cost slightly more than leaded avgas. . “Small batches cost money,” he said. “Until we can get [production] accelerated as we produce millions of gallons at a time, there will be an increase [additional] cost,” he said.

“It won’t be unreasonable,” he said. “Pilots in America will not pay what they pay for avgas in Europe today.” 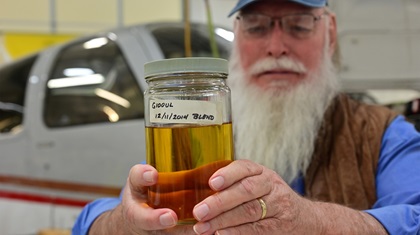 And although they pay a little more at the pump, owners can expect to see engines that run more efficiently. “I think the days of cleaning spark plugs every 50 hours are going to be behind us for good,” Braly said.

Swift Fuels Inc., an Indiana-based company, received FAA approval for its 94-octane unleaded fuel and expanded its distribution, particularly on the West Coast. Swift Fuels 94 octane fuel meets some, but not all, of the demand for aircraft with low compression engines. The company is developing 100R unleaded fuel with over 10% renewable content.

AOPA continues to encourage all fuel manufacturers to follow their own formulations, Baker said. “We would like to see multiple fuels available that all work together and blend together. Competition is always good for markets.